The appropriately titled spy thriller will hit stores in November. You can pre-order the disc here.

In an early announcement to retailers, 20th Century Fox is preparing 'The November Man' for Blu-ray on November 25.

Code named 'The November Man'; Peter Devereaux (Pierce Brosnan) is an extremely dangerous and highly trained ex-CIA agent, who is lured out of quiet retirement on a very personal mission. He must protect valuable witness, Alice Fournier, (Olga Kurylenko) who could expose the truth behind a decades old conspiracy. He soon discovers this assignment makes him a target of his former friend and CIA protégé David Mason (Luke Bracey). With growing suspicions of a mole in the agency, there is no one Devereaux can trust, no rules and no holds barred.

Specs have not been detailed yet, but supplements will include: The Making of The November Man; Theatrical Trailer; Audio Commentary by Roger Donaldson, Pierce Brosnan and Beau St. Clair; Brosnan Is Back! - Featurette; and Bringing Belgrade to the Big Screen - Featurette.

You can find the latest specs for 'The November Man' linked from our Blu-ray Release Schedule, where it's indexed under November 25. 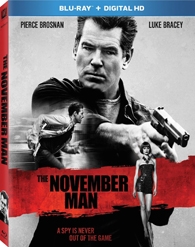 Discs mentioned in this article: (Click for specs and reviews)
The November Man (Blu-ray)