'The Marine 4: Moving Target' Dated and Detailed for Blu-ray

The fourth action-packed film in the WWE Studios franchise will target Blu-ray in April.

In an early announcement to retailers, 20th Century Fox will be releasing 'The Marine 4: Moving Target' on Blu-ray on April 21.

WWE Superstar Mike "The Miz" Mizanin is back as American hero Jake Carter in an all-new thrill-packed Marine adventure. Now in the private sector, Carter is assigned to protect a "high-value package" – a beautiful whistleblower trying to expose a corrupt military defense contractor. But a heavily armed team of mercenaries has been hired to kill her, along with anyone who gets in their way, and it's going to take a fearless one-man fighting machine to stop them. Co-starring WWE Diva Summer Rae in her feature film debut, The Marine 4: Moving Target is locked and loaded with explosive action from start to finish.

The Blu-ray will feature 1080p video, a lossless 5.1 soundtrack, and supplements include: Firepower, The Franchise, and Beauty is Dangerous featurettes.

You can find the latest specs for 'The Marine 4: Moving Target' linked from our Blu-ray Release Schedule, where it is indexed under April 21. 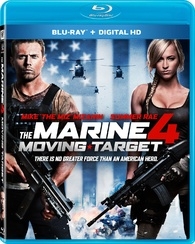