In an early announcement to retailers, 20th Century Fox says 'The Drop' will hit stores on January 20.

A phenomenal cast, including Tom Hardy and James Gandolfini, lead this gritty thriller about Bartender Bob Saginowski (Hardy) and his hardened employer Uncle Marv (Gandolfini) who must choose between survival and loyalty when they find themselves caught in a robbery gone Bad, and on the hook for a mob debt they can't repay.

The Blu-ray will feature 1080p video, lossless 5.1 audio, and supplements will include: deleted scenes, promotional featurettes, and an audio commentary.

You can find the latest specs for 'The Drop' linked from our Blu-ray Release Schedule, where it is indexed under January 20. 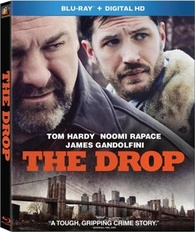