David Frankel's hit 2006 romantic comedy will be getting a 10th anniversary edition next month.

In an early announcement to retailers, 20th Century Fox says 'The Devil Wears Prada: 10th Anniversary Edition' will arrive on Blu-ray on January 12.

Based on the hilarious best-selling novel, this sinfully funny movie stars Oscar winners Meryl Streep as fashion magazine editor Miranda Priestly and Anne Hathaway as Andy, the young woman who lands a job "to die for" as Miranda's assistant — a job that might, in fact, be the death of Andy!

You can find the latest specs for 'The Devil Wears Prada: 10th Anniversary Edition' linked from our Blu-ray Release Schedule, where it's indexed under January 12. 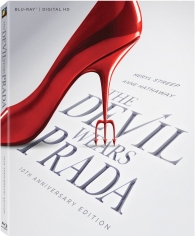