The fourth season of the FX series is planned for Blu-ray this October.

In an early announcement to retailers, 20th Century Fox has revealed 'American Horror Story: Freak Show' will arrive on Blu-ray on October 6.

Step inside "American Horror Story: Freak Show," the terrifyingly twisted reincarnation of TV's most shockingly original series. Jessica Lange leads an extraordinary, award-winning cast that includes Kathy Bates, Angela Bassett, Sarah Paulson and Michael Chiklis. Lange plays Elsa Mars, the proprietor of a troupe of human "curiosities" on a desperate journey of survival in the sleepy hamlet of Jupiter, Florida in 1952. Her menagerie of performers includes a two-headed, telepathic twin (Paulson), a take-charge bearded lady (Bates), a vulnerable strongman (Chiklis) and his sultry, three-breasted wife (Bassett). But the strange emergence of a dark entity will savagely threaten the lives of townsfolk and freaks alike.

Specs have yet to be revealed, but supplements include: "American Horror Story: Freak Show" Extra-Ordinary Artists, Two Heads Are Better Than One, The Camp, Freaklore: The Spectre of Edward Mordrake, and The Premiere.

You can find the latest specs for 'American Horror Story: Freak Show' linked from our Blu-ray Release Schedule, where it is indexed under October 6. 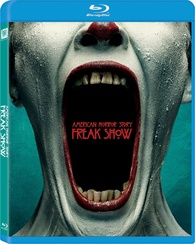