'Sons of Anarchy: Season Seven' Dated and Detailed for Blu-ray

The final season of Kurt Sutter's FX crime drama series is planned for Blu-ray in February.

In an early announcement to retailers, 20th Century Fox will be releasing 'Sons of Anarchy: Season Seven' on Blu-ray on February 24.

The season will also be available in a complete series boxed set released on the same date.

Complete your collection and relive the heart-pounding adrenaline rush of the final season of Kurt Sutter's explosive outlaw biker saga, Sons of Anarchy. Reeling from the death of the woman he loves, Jax Teller steers SAMCRO full-throttle down the hell-bound road to revenge, allowing nothing to stand in his way. The streets of Charming run red with blood as shifting alliances and fatal mistakes lead to chaos, betrayal, and all-out murder. The body count soars, and dark secrets give way to darker truths, until the only question remaining is who will live...and who will die.

You can find the latest specs for 'Sons of Anarchy: Season Seven' linked from our Blu-ray Release Schedule, where it is indexed under February 24. 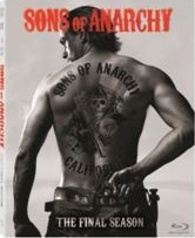