The adventures of Ichabod Crane return to Blu-ray in September.

In an early announcement to retailers, 20th Century Fox has revealed 'Sleepy Hollow: The Complete Second Season' will be available on Blu-ray on September 15.

Nothing is as it seems as the second exhilarating season of the witty, addictive series begins! After Ichabod Crane (Tom Mison) risks his life to rescue Police Lt. Abbie Mills (Nicole Beharie) from Purgatory, the two face even greater danger as sinister forces in Sleepy Hollow gain momentum. With Katrina held captive by the Headless Horseman, and Frank Irving mysteriously back from the dead, Ichabod and Abbie must rely on instinct to know who to trust in their quest to permanently vanquish Moloch – and stop the apocalypse. Help arrives from a completely unexpected source, and the season ends with a shocking climax in this well-crafted show with plot twists, hair-raising chills and a truly unique take on American history!

The 3-disc set will feature 1080p video, a lossless 5.1 soundtrack, and supplements include: A Salute to Sleepyheads; Audio Commentaries; Mysteries & Mythology: The Secrets of Season Two; Monsters & Mayhem: The Creatures of Season Two; Hollow History; Deleted Scenes; and Gag reel.

You can find the latest specs for 'Homeland: The Complete Fourth Season' linked from our Blu-ray Release Schedule, where it is indexed under September 15. 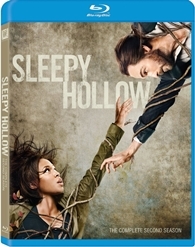