The Academy Award-winning comedy will be getting a Blu-ray double dip early next month. You can pre-order it here.

In an early announcement to retailers, 20th Century Fox will be releasing 'Sideways: 10th Anniversary Edition' on Blu-ray on October 7.

The Blu-ray will feature 1080p video, a lossless 5.1 soundtrack, and supplements will include: Full-Length Audio Commentary by Paul Giamatti and Thomas Haden Church; 7 Deleted Scenes; and Behind-the-Scenes Featurette.

You can find the latest specs for 'Sideways: 10th Anniversary Edition' linked from our Blu-ray Release Schedule, where it's indexed under October 7. 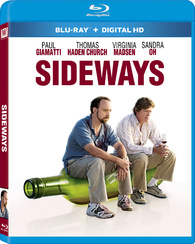