Shawn Levy's 'Night at the Museum: Secret of the Tomb' Blu-ray Dated and Detailed

In an early announcement to retailers, 20th Century Fox will release 'Night at the Museum: Secret of the Tomb' on Blu-ray on March 10.

Get ready for the wildest and most adventure-filled Night At the Museum ever as Larry (Ben Stiller) spans the globe, uniting favorite and new characters while embarking on an epic quest to save the magic before it is gone forever.

The Blu-ray/DVD/Digital Copy combo pack will feature 1080p video, a lossless 7.1 soundtrack, and supplements will include: Seven Deleted and Extended Scenes; Improv, Absurdity and Cracking Up - The Comedy of Night at the Museum: Secret of the Tomb; Two Galleries; The Theory of Relativity; Becoming Laaa; A Day in the Afterlife; The Home of History: Behind the Scenes of The British Museum, Fight at the Museum; Creating Visual Effects; and Audio Commentary by Shawn Levy.

You can find the latest specs for 'Night at the Museum: Secret of the Tomb' linked from our Blu-ray Release Schedule, where it is indexed under March 10. 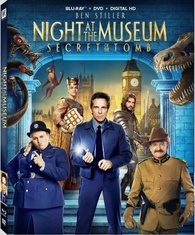