The drama starring James Franco and Jonah Hill is now available for pre-order.

In an early announcement to retailers, 20th Century Fox is preparing 'True Story' for Blu-ray on August 4.

ACADEMY AWARD® Nominees James Franco and Jonah Hill* star in this mesmerizing thriller from cowriter-director Rupert Goold, based on a chilling real-life story. After journalist Michael Finkel (Hill) is fired from The New York Times for embellishing a story, he learns that accused murderer Christian Longo (Franco) has been claiming to be him. Hoping this story will save his career, Finkel begins interviewing Longo in prison. But soon, the men find themselves in an eerie game of cat and mouse in this psychological drama that also stars OSCAR® Nominee Felicity Jone

The Blu-ray/Digital HD combo pack will feature 1080p video, a DTS-HD MA 5.1 soundtrack, and supplements will include: Alternate Ending; Deleted Scenes; Mike Finkel Featurette; Who is Christian Longo?; The Truth Behind True Story; The Making of True Story; Audio Commentary by Director Rupert Goold; and Gallery.

You can find the latest specs for 'True Story' linked from our Blu-ray Release Schedule, where it's indexed under August 4. 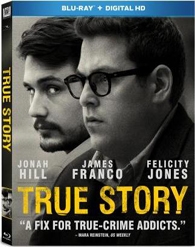 Discs mentioned in this article: (Click for specs and reviews)
True Story (Blu-ray)