The mystery thriller is heading to Blu-ray in January. You can pre-order the disc here.

In an early announcement to retailers, 20th Century Fox is preparing 'Before I Go to Sleep' for Blu-ray on January 27.

A taut thriller based on the worldwide best-selling novel by S.J. Watson, 'Before I Go to Sleep' is the story of a woman (Nicole Kidman) who wakes up every day with no memory as the result of a traumatic accident in her past. One day, terrifying new truths begin to emerge that make her question everything she thinks she knows about her life - as well as everyone in it, including her doctor (Mark Strong) and even her husband (Colin Firth).

Suggested list price for the Blu-ray/Digital HD combo pack is $29.99.

You can find the latest specs for 'Before I Go to Sleep' linked from our Blu-ray Release Schedule, where it's indexed under January 27. 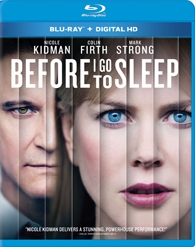 Discs mentioned in this article: (Click for specs and reviews)
Before I Go to Sleep (Blu-ray)