Full details are in for the epic sci-fi adventure starring Matt Damon arriving on Blu-ray and Blu-ray 3D this January.

As previously reported, 20th Century Fox will be releasing 'The Martian' on Blu-ray and Blu-ray 3D on January 12.

When astronauts blast off from the planet Mars, they leave behind Mark Watney (Matt Damon), presumed dead after a fierce storm. With only a meager amount of supplies, the stranded visitor must utilize his wits and spirit to find a way to survive on the hostile planet. Meanwhile, back on Earth, members of NASA and a team of international scientists work tirelessly to bring him home, while his crew mates hatch their own plan for a daring rescue mission.

Each release will feature 1080p video, lossless 7.1 audio, and supplements include: Signal Acquired: Writing and Direction - Learn how the producers brought an acclaimed novel, a master director and a stellar cast together for THE MARTIAN; Occupy Mars: Casting and Costumes - Matt Damon and his ensemble of incredibly talented actors discuss their roles in THE MARTIAN; 5 Theatrical In-World Pieces; Ares III: Refocused - Seven years after the events of Ares 3, take a deeper look at the true story behind Mark Watney's daring rescue; Gag Reel; and Production Gallery.

You can find the latest specs for 'The Martian' linked from our Blu-ray Release Schedule, where it's indexed under January 12. 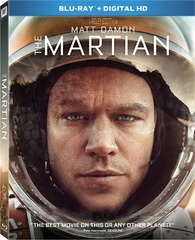 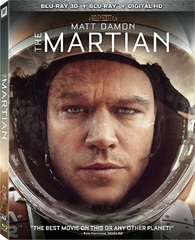