The action-packed epic arriving on Blu-ray in March has been fully detailed.

As previously reported, 20th Century Fox will bring 'Exodus: Gods and Kings' to Blu-ray and Blu-ray 3D on March 17.

From acclaimed director Ridley Scott (Gladiator, Prometheus) comes the epic adventure "Exodus: Gods and Kings," the story of one man's daring courage to take on the might of an empire. Using state-of-the-art visual effects and 3D immersion, Scott brings new life to the story of the defiant leader Moses (Christian Bale) as he rises up against the Egyptian Pharaoh Ramses (Joel Edgerton), setting 600,000 slaves on a monumental journey of escape from Egypt and its terrifying cycle of deadly plagues.

Each Blu-ray combo pack will feature 1080p video, a lossless 7.1 soundtrack, and supplements will include: Nine (9) Deleted and Extended Scenes; Audio Commentary by Director/Producer Ridley Scott and Co-Screenwriter Jeffrey Caine; and The Exodus Historical Guide, a Feature length Trivia Track.

The 3D release will add: Keepers of the Covenant Documentary including 14 Enhancement Pods; The Lawgiver's Legacy: Moses Throughout History; The Gods and Kings Archive; Promotional Featurettes including the HBO First Look; and 11 Galleries.

You can find the latest specs for 'Exodus: Gods and Kings' linked from our Blu-ray Release Schedule, where it's indexed under March 17. 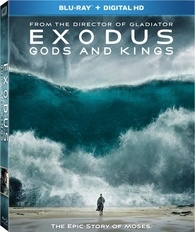 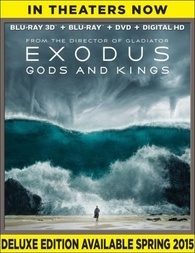