The film starring Jason Bateman and Olivia Wilde will be available on Blu-ray in January.

In an early announcement to retailers, 20th Century Fox is working on 'The Longest Week' for Blu-ray on January 6.

Affluent and aimless, Conrad Valmont lives a life of leisure in his parent's prestigious Manhattan Hotel. In the span of one week, he finds himself evicted, disinherited, and... in love.

Suggested list price for the Blu-ray combo pack is $39.99.

You can find the latest specs for 'The Longest Week' linked from our Blu-ray Release Schedule, where it's indexed under January 6. 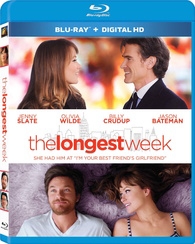