The action-comedy starring Melissa McCarthy and Jason Statham is now available for pre-orders.

In an early announcement to retailers, 20th Century Fox will be bringing 'Spy' on Blu-ray sometime later this year.

Susan Cooper is an unassuming deskbound CIA analyst and the unsung hero behind the Agency's most dangerous missions. But when her partner falls off the grid and another top agent is compromised, she volunteers to go deep undercover to infiltrate the world of a deadly arms dealer, and prevent a global disaster.

Specs and supplements haven't been revealed yet, but the suggested list price for the Blu-ray is $24.74.

You can find the latest specs for 'Spy' linked from our Blu-ray Release Schedule, where it is indexed under PENDING. 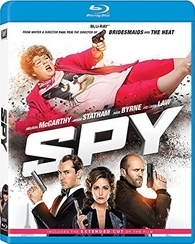