The film starring Michael Caine, Harvey Keitel, and Rachel Weisz is headed for Blu-ray in March.

In an early announcement to retailers, 20th Century Fox is set to bring 'Youth' to Blu-ray on March 1.

From Paolo Sorrentino, the director of Italy's Oscar foreign language winner The Great Beauty* comes Youth, about two longtime friends vacationing in the Swiss Alps. Oscar winning actor Michael Caine plays Fred, an acclaimed composer and conductor, who brings along his daughter (Rachel Weisz) and best friend Mick (Harvey Keitel), a renowned filmmaker. While Mick scrambles to finish the screenplay for what he imagines will be his last important film, Fred has no intention of resuming his musical career. The two men reflect on their past, each finding that some of the most important experiences can come later in life.

The Blu-ray will feature 1080p video, lossless 7.1 audio, and supplements include five featurettes, an image gallery, and a theatrical trailer.

You can find the latest specs for 'Youth' linked from our Blu-ray Release Schedule, where it's indexed under March 1. 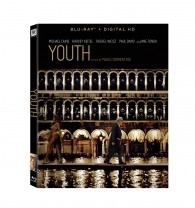