The touching dramedy starring Oscar winners Kevin Costner and Octavia Spencer is headed for Blu-ray in May.

In an early announcement to retailers, 20th Century Fox is preparing 'Black or White' for Blu-ray on May 5.

When two grandparents, Elliott (Costner) and Rowena (Spencer), engage in a heated custody dispute over their beloved granddaughter, the ensuing legal battle forces them to confront their true feelings on race and forgiveness. Can people from two seemingly different worlds find common ground when nothing is as simple as black or white?

The Blu-ray will feature 1080p video, a lossless 5.1 soundtrack, and supplements will include: Shades of Gray: The Making of Black or White, Theatrical Trailer, and Blu-ray exclusive Kevin Costner Featurette, and Family First Featurette.

You can find the latest specs for 'Black or White' linked from our Blu-ray Release Schedule, where it's indexed under May 5. 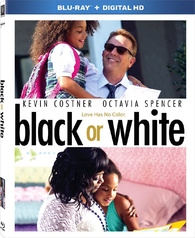