Michael Hoffman's Romance 'The Best of Me' Bound for Blu-ray

The drama based on a story by Nicholas Sparks will be available on Blu-ray in February.

In an early announcement to retailers, 20th Century Fox will be releasing 'The Best of Me' on Blu-ray on February 3.

Based on the bestselling novel by acclaimed author Nicholas Sparks, 'The Best of Me' tells the story of Dawson and Amanda, two former high school sweethearts who find themselves reunited after 20 years apart, when they return to their small town for the funeral of a beloved friend. Their bittersweet reunion reignites the love they've never forgotten, but soon they discover the forces that drove them apart twenty years ago live on, posing even more serious threats today. Spanning decades, this epic love story captures the enduring power of our first true love, and the wrenching choices we face when confronted with elusive second chances.

The Blu-ray will feature 1080p video, a lossless 5.1 soundtrack, and supplements will include: Audio Commentary by Michael Hoffman, "Tears of Joy" Alternate Cut/Ending, "Along for the Ride", Music Video: "I Did" by Lady Antebellum, as well as three Blu-ray exclusives - Nicholas Sparks Interviews: Michelle (Monaghan) and James (Marsden), Nicholas Sparks Interviews: Liana (Liberato) and Luke (Bracey), and Deleted Scenes.

You can find the latest specs for 'The Best of Me' linked from our Blu-ray Release Schedule, where it is indexed under February 3. 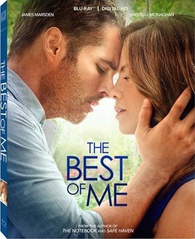