The crime drama starring Woody Harrelson is now up for pre-order.

In an early announcement to retailers, 20th Century Fox is preparing 'The Sunchaser' for Blu-ray on August 11.

A young L.A. doctor who's going places. A bitter street kid going nowhere. They're worlds apart but their destinies collide in director Michael Cimino's compelling road odyssey The Sunchaser. Woody Harrelson plays Michael Reynolds, a wealthy doctor. But Michael's fast-track life detours when a desperately ill patient (Jon Seda of 'Dear God' and '12 Monkeys') kidnaps him at gunpoint. Across highways and backroads, kidnapper and hostage seek a legendary Navajo healing place while a manhunt closes in on them.

You can find the latest specs for 'The Sunchaser' linked from our Blu-ray Release Schedule, where it's indexed under August 11. 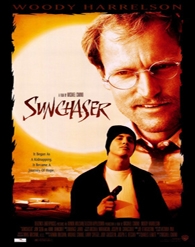 Discs mentioned in this article: (Click for specs and reviews)
The Sunchaser (Blu-ray)