'Let's Be Cops' Dated for Blu-ray

The fake buddy cop comedy will frisk Blu-ray in November. You can pre-order it now.

In an early announcement to retailers, 20th Century Fox will be releasing 'Let's Be Cops' on Blu-ray on November 11.

When two struggling pals dress as police officers for a costume party, they become neighborhood sensations. But when these newly-minted “heroes” get tangled in a real life web of mobsters and dirty detectives, they must put their fake badges on the line.

You can find the latest specs for 'Let's Be Cops' linked from our Blu-ray Release Schedule, where it is indexed under November 11. 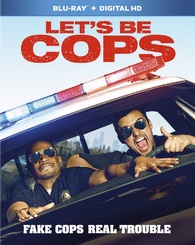