Larry the Cable Guy stars in this holiday sequel heading to Blu-ray just in time for the holidays. Pre-orders are now live.

In an early announcement to retailers, 20th Century Fox is preparing 'Jingle All the Way 2' for Blu-ray on December 2.

Two desperate dads compete in a no-holds-barred battle to be the best father and make this the best Christmas ever. Fun-loving, laid-back dad Larry is having a bear of a time finding the perfect Christmas gift for his eight-year-old daughter, Noel. The season's hottest toy, The Harrison Bear, is all sold out, and Noel's new stepfather wants to keep it that way - so he can be the one to make her holiday wish come true. When Larry learns all Noel wants for Christmas is the bear, he'll stop at nothing to make his little girl happy and get her the toy of her dreams.

Suggested list price for the Blu-ray/DVD/Digital HD combo pack is $29.99.

You can find the latest specs for 'Jingle All the Way 2' linked from our Blu-ray Release Schedule, where it's indexed under December 2. 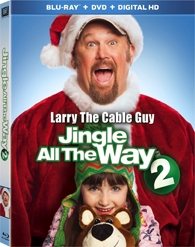 Discs mentioned in this article: (Click for specs and reviews)
Jingle All the Way 2 (Blu-ray)