The animated flick will be ready to fight on Blu-ray later this year.

In an early announcement to retailers, 20th Century Fox is preparing 'Kung Fu Panda 3' for Blu-ray sometime in 2016. A Blu-ray 3D Deluxe Edition will also be available.

When Po's long-lost panda father suddenly reappears, the reunited duo travels to a secret panda paradise to meet scores of hilarious new panda characters. But when the supernatural villain Kai begins to sweep across China defeating all the kung fu masters, Po must do the impossible-learn to train a village full of his fun-loving, clumsy brethren to become the ultimate band of Kung Fu Pandas.

Suggested list price for the Blu-ray/DVD/Digital HD combo pack is $36.99.

You can find the latest specs for 'Kung Fu Panda 3' linked from our Blu-ray Release Schedule, where it's indexed under PENDING. 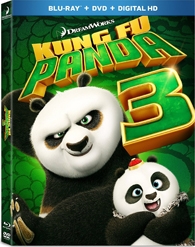