Ridley Scott's historical epic is getting the special edition treatment on Blu-ray in October. You can pre-order the disc now.

In an early announcement to retailers, 20th Century Fox is preparing 'Kingdom of Heaven: Ultimate Edition' for Blu-ray on October 7. The release will include the Director's Cut, Director's Cut Roadshow Version, and Original Theatrical Versions.

On the brink of celebrating its 10th anniversary, a truly legendary cast leads this visually spectacular epic, including Orlando Bloom, Eva Green, Liam Neeson and Academy Award-winner Jeremy Irons. Bloom stars as Balian, a young blacksmith who has lost his family and his faith. But when his father (Neeson) reveals his destiny, Balian joins the heroic fight to protect his people from overwhelming forces, and rises to knighthood.

Suggested list price for the 2-Disc Blu-ray/UltraViolet combo pack is $25.99.

You can find the latest specs for 'Kingdom of Heaven: Ultimate Edition' linked from our Blu-ray Release Schedule, where it's indexed under October 7. 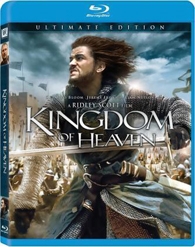 Discs mentioned in this article: (Click for specs and reviews)
Kingdom of Heaven: Ultimate Edition (Blu-ray)