The film starring Jennifer Aniston is planned for Blu-ray in April.

In an early announcement to retailers, 20th Century Fox will be releasing 'Cake' on Blu-ray on April 21.

'Cake' takes us into the darkly funny world of Claire Bennett (Jennifer Aniston) who initiates a dubious relationship with a widower (Sam Worthington) while confronting fantastical hallucinations of his dead wife (Anna Kendrick). With her feisty housekeeper-cum-caretaker (Adriana Barraza) ever at her side, Claire searches for human connection and self-forgiveness in this tale of personal redemption.

The Blu-ray/DVD combo pack will feature 1080p video, a lossless 5.1 soundtrack, and supplements will include: The Many Layers of Cake: Learning to Live Again; The Icing on the Cake: Meet the Cast; and Theatrical Trailer.

You can find the latest specs for 'Cake' linked from our Blu-ray Release Schedule, where it is indexed under April 21. 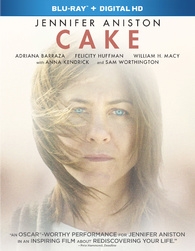