Pablo Larraín's biopic about Jacqueline Kennedy will arrive on Blu-ray in March.

In an early announcement to retailers, 20th Century Fox is preparing 'Jackie' for Blu-ray on March 7.

Jackie is a portrait of one of the most important and tragic moments in American history, seen through the eyes of the iconic First Lady, then Jacqueline Kennedy. Jackie places us in her world during the days immediately following her husband's assassination. Known for her extraordinary dignity and poise, here we see a portrait of the First Lady as she fights to establish her husband's legacy and the world of "Camelot" that she created and loved so well.

You can find the latest specs for 'Jackie' linked from our Blu-ray Release Schedule, where it's indexed under March 7. 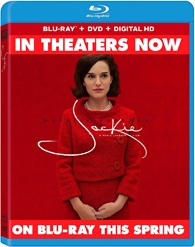 Discs mentioned in this article: (Click for specs and reviews)
Jackie (Blu-ray)