Pablo Larraín's biopic about Jacqueline Kennedy will arrive on Blu-ray in March.

As previously reported, 20th Century Fox is preparing 'Jackie' for Blu-ray on March 7.

OSCAR Winner Natalie Portman (Best Actress, Black Swan, 2011) leads an acclaimed cast in this powerfully stirring drama as First Lady Jacqueline Kennedy. As she grapples with unimaginable grief and trauma following President John F. Kennedy's assassination, "Jackie's" faith and strength lead her to a new life with her children. While she honors her husband's remarkable legacy, she also leaves her own indelible mark.

Specs have yet to be revealed, but supplements will include: From Jackie to Camelot Featurette; Audio Commentary by Pablo Larraín and Natalie Portman; and Gallery.

You can find the latest specs for 'Jackie' linked from our Blu-ray Release Schedule, where it's indexed under March 7. 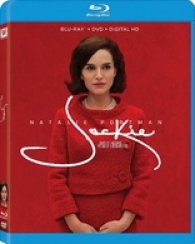