The super-powered reboot is planned for Blu-ray next month.

In an early announcement to retailers, 20th Century Fox will be releasing 'Fantastic Four' on Blu-ray on December 15.

The FANTASTIC FOUR make a triumphant return with MARVEL's next generation of heroes - four young outsiders who teleport to an alternate universe, their physical forms altered in shocking ways. Their lives changed forever, Reed Richards (MR. FANTASTIC), Sue Storm (INVISIBLE WOMAN), Johnny Storm (THE HUMAN TORCH) and Ben Grimm (THE THING) must harness their incredible new powers and work together to save Earth from a former friend turned enemy, the infamous DR. DOOM.

The Blu-ray will feature 1080p video, lossless 5.1 audio, and supplements include: Powering Up: Superpowers of the Fantastic Four; The Quantum Gates, Planet Zero; Concept Art; and More!

You can find the latest specs for 'Fantastic Four' linked from our Blu-ray Release Schedule, where it is indexed under December 15. 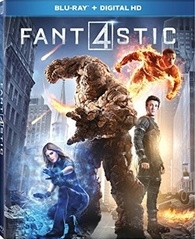