As previously reported, 20th Century Fox is preparing 'Independence Day: Resurgence' for Blu-ray, Blu-ray 3D, and Ultra HD Blu-ray, and now the date has been set for October 18. In addition, a Best Buy Exclusive Steelbook Blu-ray is also available for pre-order.

We always knew they were coming back. After INDEPENDENCE DAY redefined the event movie genre, the next epic chapter delivers global catastrophe on an unimaginable scale. Using recovered alien technology, the nations of Earth have collaborated on an immense defense program to protect the planet. But nothing can prepare us for the aliens' advanced and unprecedented force. Only the ingenuity of a few brave men and women can bring our world back from the brink of extinction.

Each release will feature a lossless 7.1 soundtrack (Dolby Atmos on the UHD) and supplements include: Eight Deleted Scenes with Audio Commentary by Roland Emmerich; The War of 1996; It's Early, ABQ!; Another Day: The Making of Independence Day: Resurgence; Gag Reel; Audio Commentary by Roland Emmerich; Concept Art; Theatrical Trailers and TV Spot. 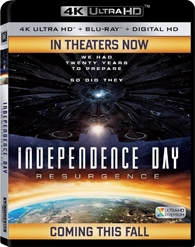 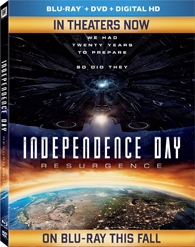 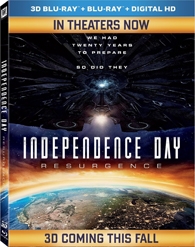