'I Origins' Planned for Blu-ray

In an early announcement to retailers, 20th Century Fox says 'I Origins' on Blu-ray on December 9.

Michael Pitt (TV's Boardwalk Empire) and Brit Marling (Another Earth) star in this thought-provoking drama that challenges the line between facts and faith. Dr. Ian Gray (Pitt) is a molecular biologist studying the evolution of the eye, along with his lab partner, Karen (Marling). After a tragic romance with an exotic young woman (Astrid Bergès-Frisbey), Ian's obsession with her triggers a chain of events that leads to a stunning discovery years later...one that may unlock the greatest mysteries of life.

The Blu-ray will feature 1080p video, a DTS-HD Master Audio 7.1 soundtrack, and supplements will include: Deleted Scenes, A Window to the Soul, The Origins of Connectedness, Image Gallery, and Theatrical Trailer.

You can find the latest specs for 'I Origins' linked from our Blu-ray Release Schedule, where it's indexed under December 9. 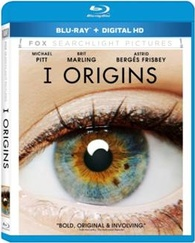