The fourth season of the acclaimed series will infiltrate Blu-ray this October.

In an early announcement to retailers, 20th Century Fox says 'Homeland: The Complete Fourth Season' will hit Blu-ray on September 8.

Gripping suspense escalates to a fever pitch in the brilliantly reinvented fourth season of this Emmy Award®-winning thriller. In her new role as a CIA station chief, Carrie (Emmy winner Claire Danes) convinces Saul (Emmy nominee Mandy Patinkin) and Quinn to help her hunt down one of the world's most dangerous terrorists. But when Carrie recruits a young Pakistani as an asset, the lines between right and wrong blur and the operation spins out of control. Facing unclear loyalties at every turn, Carrie must take extreme measures and risk everything to protect her country.

Specs have yet to be revealed, but supplements include: Deleted Scenes, Character Profiles, From Script to Screen, Caught in the Crosshairs, Brody's Return, and Storming the Embassy.

You can find the latest specs for 'Homeland: The Complete Fourth Season' linked from our Blu-ray Release Schedule, where it is indexed under September 8. 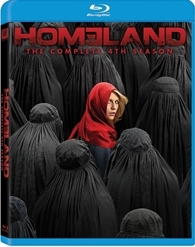