Michael Mann's explosive 1995 film starring Al Pacino, Robert De Niro, and Val Kilmer will be getting a Blu-ray upgrade sourced from a new 4K remaster supervised by the director this May.

In an early announcement to retailers, 20th Century Fox is preparing 'Heat: Director's Definitive Edition' for Blu-ray on May 9.

When Al Pacino and Robert De Niro square off, Heat sizzles. Written and directed by Michael Mann, Heat includes dazzling set pieces and a bank heist that USA Today's Mike Clark calls "the greatest action scene of recent times." It also offers "the most impressive collection of actors in one movie this year" (Newsweek). Val Kilmer, Jon Voight, Tom Sizemore and Ashley Judd are among the memorable supporting players in this tale of a brilliant L.A. cop (Pacino) following the trail from a deadly armed robbery to a crew headed by an equally brilliant master thief (De Niro).

Heat goes way beyond the expectations of the cops-and-criminals genre and into the realm of movie masterpiece.

You can find the latest specs for 'Heat: Director's Definitive Edition' linked from our Blu-ray Release Schedule, where it is indexed under May 9. 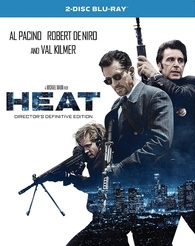