The 2017 psychological thriller from the visionary director of The Ring is bound for Blu-ray this June.

In an early announcement to retailers, 20th Century Fox is set to release 'A Cure for Wellness' on Blu-ray on June 6.

An ambitious young executive is sent to retrieve his company's CEO from an idyllic but mysterious "wellness center" at a remote location in the Swiss Alps. He soon suspects that the spa's miraculous treatments are not what they seem. When he begins to unravel its terrifying secrets, his sanity is tested, as he finds himself diagnosed with the same curious illness that keeps all the guests here longing for the cure.

Specs have yet to be revealed, but supplements include: Meditations - Featurette; The Score - Featurette; and Deleted Scene: "It's Wonderful Here" (a.k.a. Embryonic Sequence).

You can find the latest specs for 'A Cure for Wellness' linked from our Blu-ray Release Schedule, where it is indexed under June 6. 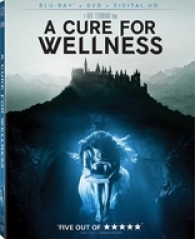