As previously reported, 20th Century Fox is working on 'Shut In' for Blu-ray on February 28.

Recently widowed child psychologist Mary Portman (Naomi Watts) lives an isolated existence caring for her bedridden stepson (Charlie Heaton) in rural New England. But when a young boy (Jacob Tremblay) Mary is treating goes missing in a snowstorm and is presumed dead, she becomes convinced that his ghost is haunting her...and soon Mary's grip on reality turns as slippery as her icy surroundings.

The combo pack will feature 1080p video, lossless audio, and supplements include: Nightmare V. Reality: Imagining Shut In and House on Delphi Lane: A Classic.

You can find the latest specs for 'Shut In' linked from our Blu-ray Release Schedule, where it is indexed under February 28. 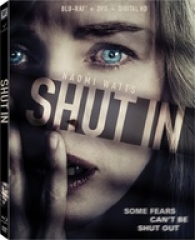