The classic 1946 film is set to arrive on Blu-ray early next year. Pre-order here.

In an early announcement to retailers, 20th Century Fox is preparing 'The Razor's Edge' for Blu-ray on January 13.

Screen legend Tyrone Power stars in this engaging classic based on W. Somerset Maugham's best-selling novel. Despite being offered an impressive job when he returns from World War I, Larry Darrell (Power) instead opts for the Paris bohemian lifestyle, followed by a soul-searching trip to the Far East. After his beautiful fiancée (Gene Tierney) loses patience with the spiritual seeker and marries a wealthy man, Larry finds himself drawn to Sophie (Anne Baxter in an Oscar-winning performance), an old friend. Newly widowed, Sophie has descended into alcoholism, a state from which Larry hopes to save her in this thought-provoking film Nominated for four Academy Awards, including Best Picture.

Specs have yet to be revealed, but supplements include: Audio Commentary by Film Historians and Fox Movietone News Footage.

You can find the latest specs for 'The Razor's Edge' linked from our Blu-ray Release Schedule, where it is indexed under January 13. 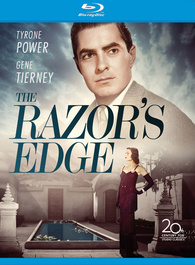