'Earth to Echo' Blu-ray Pre-Orders Up

Relativity's PG summer family adventure movie bound for Blu-ray in October is now up for pre-order at Amazon.

As previously reported, 20th Century Fox will be releasing 'Earth to Echo' on Blu-ray on October 21.

Tuck, Munch and Alex are a trio of inseparable friends whose lives are about to change. Their neighborhood is being destroyed by a highway construction project that is forcing their families to move away. But just two days before they must part ways, the boys begin receiving a strange series of signals on their phones. Convinced something bigger is going on, they team up with another school friend, Emma, and set out to look for the source of their phone signals. What they discover is something beyond their wildest imaginations: a small alien who has become stranded on Earth. In need of their help, the four friends come together to protect the alien and help him find his way home. This journey, full of wonder and adventure, is their story, and their secret.

The Blu-ray/DVD/Digital Copy combo pack will feature 1080p video, lossless 5.1 audio, and supplements will include: Creating The Truck Scene, Casting The Characters, We Made That!: The Making of Earth to Echo, Friends No Matter How Far, and Original Theatrical Trailer.

You can find the latest specs for 'Earth to Echo' linked from our Blu-ray Release Schedule, where it is indexed under October 21. 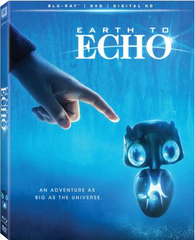