The Blu-ray Combo Pack will be packed with over 2 hours of extras and an exclusive comic book. You can pre-order it here.

In an early announcement to retailers, 20th Century Fox will be bringing 'The Maze Runner' to Blu-ray on December 16.

When Thomas (Dylan O'Brien) wakes up trapped in a massive maze with a group of other boys, he has no memory of the outside world other than strange dreams about a mysterious organization known as W.C.K.D. Only by piecing together fragments of his past with clues he discovers in the maze can Thomas hope to uncover his true purpose and a way to escape. Based upon the best-selling novel by James Dashner.

The Blu-ray/DVD/Digital Copy combo will feature 1080p video, a lossless 7.1 soundtrack, and supplements will include two hours of extras and exclusive comic book.

You can find the latest specs for 'The Maze Runner' linked from our Blu-ray Release Schedule, where it is indexed under December 16. 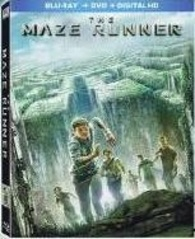