Get all five action-packed movies on Blu-ray for under $60 in early February.

In an early announcement to retailers, 20th Century Fox is set to release 'Die Hard 5-Movie Collection' on Blu-ray on February 7.

You can find the latest specs for 'Die Hard 5-Movie Collection' linked from our Blu-ray Release Schedule, where it is indexed under February 7. 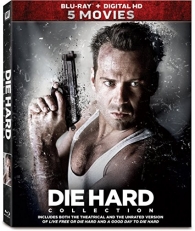