Can You Feel the Heat? 'The Maze Runner: The Scorch Trials' Dated and Detailed for Blu-ray

The action-packed sequel is headed for Blu-ray in December.

In an early announcement to retailers, 20th Century Fox will be releasing 'The Maze Runner: The Scorch Trials' on Blu-ray on December 15.

In this next chapter of the epic "Maze Runner" saga, Thomas (Dylan O'Brien) and his fellow Gladers face their greatest challenge yet: searching for clues about the mysterious and powerful organization known as WCKD. Their journey takes them to the Scorch, a desolate landscape filled with unimaginable obstacles. Teaming up with resistance fighters, the Gladers take on WCKD's vastly superior forces and uncover its shocking plans for them all.

You can find the latest specs for 'The Maze Runner: The Scorch Trials' linked from our Blu-ray Release Schedule, where it is indexed under December 15. 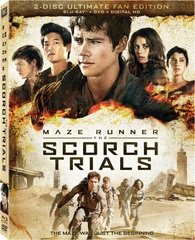