The action-thriller starring Ed Skrein being delivered to Blu-ray in December has now been fully detailed.

As previously reported, 20th Century Fox will be releasing 'The Transporter Refueled' on Blu-ray on December 8.

Frank Martin, played by newcomer Ed Skrein, a former special-ops mercenary, is now living a less perilous life- or so he thinks- as an independent agent contracted to transport classified packages for questionable people. When Frank's father (Ray Stevenson), pays him a visit in the south of France, their father-son bonding weekend soon takes a turn for the worst when Frank is engaged by the cunning femme-fatale, Anna (Loan Chabanol), and her three seductive sidekicks on a mission to orchestrate the bank heist of the century. Frank must use his covert expertise and knowledge of fast cars, fast driving and fast women in an attempt to outrun a sinister Russian kingpin, and worse than that, they are thrust into a dangerous game of chess with a team of gorgeous women looking for revenge.

The Blu-ray will feature 1080p video, lossless 5.1 audio, and supplements include: Frank Martin: The Reluctant Hero; The Coeur Brise: Les Femmes of Refueled; and Rocketing from 0-60.

You can find the latest specs for 'The Transporter Refueled' linked from our Blu-ray Release Schedule, where it's indexed under December 8. 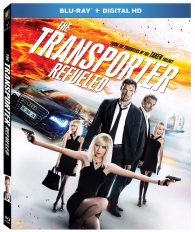