'Calvary' Blu-ray Up for Pre-Order!

The Irish drama starring Brendan Gleeson is heading to Blu-ray soon, and you can pre-order the movie now.

In an early announcement to retailers, 20th Century Fox is preparing 'Calvary' for Blu-ray in the near future.

Calvary's Father James (Brendan Gleeson) is a good priest who is faced with sinister and troubling circumstances brought about by a mysterious member of his parish. Although he continues to comfort his own fragile daughter (Kelly Reilly) and reach out to help members of his church with their various scurrilous moral - and often comic - problems, he feels sinister and troubling forces closing in, and begins to wonder if he will have the courage to face his own personal Calvary.

Specs and supplements have not been detailed yet, but suggested list price for the Blu-ray/Digital HD combo pack is $27.99.

You can find the latest specs for 'Calvary' linked from our Blu-ray Release Schedule, where it's indexed under PENDING. 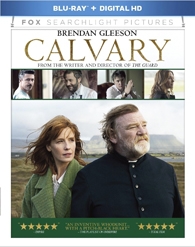 Discs mentioned in this article: (Click for specs and reviews)
Calvary (Blu-ray)