Break Out the Bubbly: 'Absolutely Fabulous: The Movie' Announced for Blu-ray

Eddy and Patsy are headed to Blu-ray in November.

In an early announcement to retailers, 20th Century Fox says 'Absolutely Fabulous: The Movie' will be available on Blu-ray on November 29.

Edina and Patsy are back in their fabulous and hilarious big-screen debut! Still oozing glitz and glamour while clubbing their way around London, the beloved boozers find themselves in a media firestorm when they’re blamed for accidentally killing Kate Moss at a fashion event. Perfectly accessorized with dozens of celebrity cameos, including Jon Hamm, Kate Moss, Joan Collins and many more, this uproarious, madcap romp is bloody good fun, sweetie darling!

The combo pack will feature 1080p video, a lossless 5.1 soundtrack, and supplements include: Deleted Scenes, Outtakes, On Set with Dame Edna, 8 Featurettes, and a Gallery.

You can find the latest specs for 'Absolutely Fabulous: The Movie' linked from our Blu-ray Release Schedule, where it is indexed under November 29. 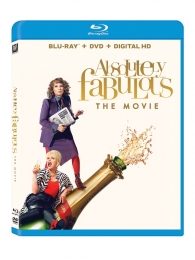