'Boys on the Side' Blu-ray Dated for August

The comedy starring Whoopi Goldberg, Mary-Louise Parker, and Drew Barrymore is now up for pre-order.

In an early announcement to retailers, 20th Century Fox is preparing 'Boys on the Side' for Blu-ray on August 11.

You can find the latest specs for 'Boys on the Side' linked from our Blu-ray Release Schedule, where it's indexed under August 11. 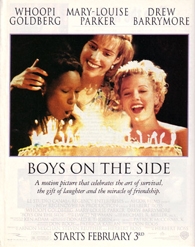 Discs mentioned in this article: (Click for specs and reviews)
Boys on the Side (Blu-ray)