The conclusion to Ayn Rand's epic is coming to Blu-ray in January. You can pre-order the disc here.

In an early announcement to retailers, 20th Century Foc is preparing 'Atlas Shrugged Part III: Who Is John Galt?' for Blu-ray on January 6.

Approaching collapse, the nation's economy is quickly eroding. As crime and fear take over the countryside, the government continues to exert its brutal force against the nation's most productive who are mysteriously vanishing - leaving behind a wake of despair. One man has the answer. One woman stands in his way. Some will stop at nothing to control him. Others will stop at nothing to save him. He swore by his life. They swore to find him. Who is John Galt?

You can find the latest specs for 'Atlas Shrugged Part III: Who Is John Galt?' linked from our Blu-ray Release Schedule, where it's indexed under January 6. 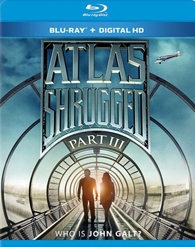 Discs mentioned in this article: (Click for specs and reviews)
Atlas Shrugged Part III: Who Is John Galt? (Blu-ray)