The seventh season of the animated comedy series is now available for Blu-ray preorders at Amazon.

In an early announcement to retailers, 20th Century Fox is preparing 'Archer: The Complete Season Seven' for Blu-ray sometime later this year.

The series follows super-spy Sterling Archer and his fellow covert government operatives on irreverent adventures across the globe.

You can find the latest specs for 'Archer: The Complete Season Seven' linked from our Blu-ray Release Schedule, where it is indexed under PENDING. 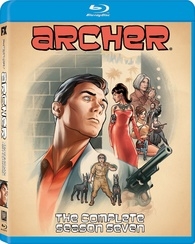