The fifth season of the horror series will check into Blu-ray this October.

In an early announcement to retailers, 20th Century Fox says 'American Horror Story: Hotel' will be available on Blu-ray on October 4.

Check in to the fifth season of the deliciously diabolical series from creators Ryan Murphy & Brad Falchuk, starring a killer cast that includes Lady Gaga – in her Golden Globe-winning role as The Countess – along with Kathy Bates, Angela Bassett, Matt Bomer, Denis O'Hare and Sarah Paulson. A string of grisly murders is traced back to the sinister, sensuous Countess (Gaga), an infamous resident of the stylish Hotel Cortez in Downtown Los Angeles. American Horror Story: Hotel is a visually stunning, visceral feast. Explore the hidden corridors of this fiendishly entertaining show, and go gaga over Lady Gaga and all of the exclusive extras on Blu-ray.

The Blu-ray will feature 1080p video, lossless 5.1 audio, and supplements include An Invitation to Devil's Night and The Cortez: An Era of Elegance Gone By.

You can find the latest specs for 'American Horror Story: Hotel' linked from our Blu-ray Release Schedule, where it is indexed under October 4. 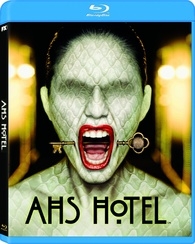