'Alvin and the Chipmunks: The Road Chip' Dated and Detailed for Blu-ray

The zany musical-loving chipmunks will be back on Blu-ray next month.

In an early announcement to retailers, 20th Century Fox will be releasing 'Alvin and the Chipmunks: The Road Chip' on Blu-ray on March 15.

Hit the road with your favorite fur balls in the funniest Alvin and the Chipmunks ever! Alvin, Simon and Theodore race to Miami on a wild road trip, but their jaunt soon takes a nutty detour, leading to hilarious hijinks and music-packed adventures across the country. The Ultimate Playlist is featured on both Blu-ray™ and DVD so you can MUNK OUT to all the top hits from all the Alvin & The Chipmunks movies!

The Blu-ray combo pack will feature 1080p video, a lossless 7.1 soundtrack, and supplements include: Alvin and the Chipmunks: The Story So Far; Cue the Chipmunks: The Great Big Chipmunks Music Finale; Our Furry Planet; Alvinisms; WETA and the Chipmunks: Animators’ Reference Reel; Ultimate Playlist; Munk Rock; RedFoo “Squeaky Wiggle” Dance Instructional; and After the Party: A Munkumentary.

You can find the latest specs for 'Alvin and the Chipmunks: The Road Chip' linked from our Blu-ray Release Schedule, where it is indexed under March 15. 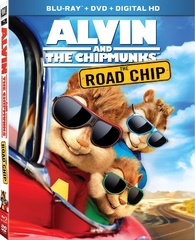