The science fiction classic will celebrate its 35th anniversary on Blu-ray in October. Pre-orders are now live.

In an early announcement to retailers, 20th Century Fox is preparing 'Alien: 35th Anniversary' for Blu-ray on October 7. The release will include the 1979 Theatrical Version and 2003 Director's Cut.

When the crew of the space-tug Nostromo responds to a distress signal from a barren planet, they discover a mysterious life form that breeds within human hosts. The acid-blooded extraterrestrial proves to be the ultimate adversary as crew members battle to stay alive and prevent the deadly creature from reaching Earth. Directed by Ridley Scott and starring Sigourney Weaver in her breakout performance as Ripley, this legendary first film in the 'Alien' saga will leave you breathless!

Suggested list price for the Blu-ray/Digital Copy combo pack is $24.99.

You can find the latest specs for 'Alien: 35th Anniversary' linked from our Blu-ray Release Schedule, where it's indexed under October 7. 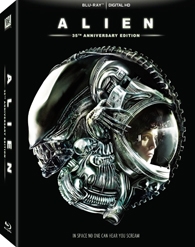