The multiple award-winning film soaring to Blu-ray in February has been detailed.

In an early announcement to retailers, 20th Century Fox will be releasing 'Birdman' on Blu-ray on February 17.

'Birdman or The Unexpected Virtue of Ignorance' is a black comedy that tells the story of an actor (Michael Keaton) -- famous for portraying an iconic superhero -- as he struggles to mount a Broadway play. In the days leading up to opening night, he battles his ego and attempts to recover his family, his career, and himself.

The Blu-ray will feature 1080p video, a lossless 5.1 soundtrack, and supplements will include: Birdman: All-Access; A Conversation with Michael Keaton and Alejandro G. Iñárritu; and Gallery: Chivo's On-Set Photos.

You can find the latest specs for 'Birdman' linked from our Blu-ray Release Schedule, where it is indexed under February 17. 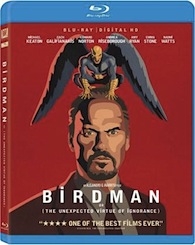