The citizens of Springfield are heading back to DVD.

Woo-hoo! After suspending home video release plans for the show several years ago, 20th Century Fox is now finally bringing The Simpsons: The Eighteenth Season to DVD on December 5. But while that's the good news, sadly there are still currently no plans to release this season or any future seasons on Blu-ray... d'oh! With that said, if sales permit, Fox does hope to bring the remaining seasons beyond 18 to DVD.

"THE SIMPSONS” – SEASON 18 was a historic one; the last before The Simpsons Movie, the season-finale 400th episode, "You Kent Always Get What You Want", "24 Minutes" with guest star Kiefer Sutherland, Treehouse of Horror XVII with the sepia-tone classic "The Day the Earth Looked Stupid" and much much more. Guest stars include Michael Imperioli, The White Stripes, Tom Wolfe and Natalie Portman and classic episodes include the Emmy-nominated "The Haw-Hawed Couple" and WGA winner "Kill Gil, Volumes I & II."

- 4-Disc Set Contains The Complete Eighteenth Season With All 22 Episodes
- Bonus episode "22 For 30" from Season 28 that includes a memorable scene with Fat Tony
- Welcome Back, Loyal Fans!
- Audio Commentary On All Episodes With Writers, Actors and Directors
- Deleted Scenes With Commentary
- Bonus Episode
- Multi-Angle Animation Showcase
- Special Language Feature
- A Conversation With Fat Tony
- And more! 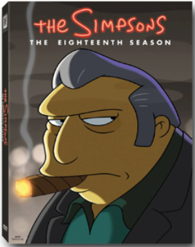