James Gray's divisive science fiction film is already up for pre-order at Amazon.

20th Century Fox's Ad Astra is now up for pre-order on 4K Ultra HD Blu-ray and Blu-ray at Amazon. No official release date has been set yet.

Astronaut Roy McBride (Brad Pitt) undertakes a mission across an unforgiving solar system to uncover the truth about his missing father (Tommy Lee Jones) and his doomed expedition that now, 30 years later, threatens the universe.

You can find the latest specs for Ad Astra linked from our 4K and Blu-ray Release Schedules, where it is indexed under PENDING. 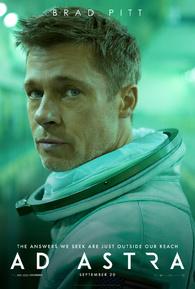